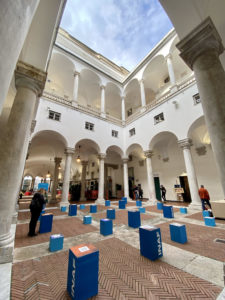 The Astrophysical CodyMaze is a variation of the CodyMaze – created by Alessandro Bogliolo within CodeMOOC – developed by the National Institute for Astrophysics in collaboration with the University of Urbino and Digit srl. This is a virtual labyrinth in the real world which proposes challenges of coding and a quiz about astronomy, astrophysics and space exploration.

CodyMaze helps develop both computational thinking and problem-solving skills. At the same time, it allows students to revise the science programme,  while having fun. Both coding puzzles and quiz are addressed to pupils starting from the junior secondary school, and adult public. Also small children have fun in a virtual laboratory, but we suggest that they are accompanied in using the mobile phone, and supported in the execution of the programming instructions.

In this game, you move on a 5 x 5 chessboard, whose boxes contain QR codes. Apparently, the chessboard is free, but, thanks to the QR codes, it presents everchanging mazes, which are proposed to the player by the Telegram @codymazebot. The player moves physically on the chessboard, following the bot’s instructions, and scans the QR code which he/she reaches at each stop, to check whether he/she has correctly followed the sequence of instructions. During the various stages of the game, sequences of instructions of increasing complexity are proposed, which introduce all the basic concepts of programming. In order to receive the series of instructions leading to the next QR code, you must answer correctly to a quiz of astronomy, whose topic depends on the box of the labyrinth. For the astrophysical version of the game, we prepared 250 multiple-choice quiz of astronomy, therefore if you want to follow the labyrinth several times, it is very unlikely that the challenges proposed may be the same. At the end of the game, the Telegram bot issues a certificate of completion, which reports the list of  programming constructs, experimented during the game.

CodyMaze is played upon a 5×5 square grid, on which 25 QR codes are arranged. The QR codes lay on the floor, at lest 50 cm from each other. In this way, the player can move with his/her boby inside the chessboard, without using pawns. If the chessboard were actually drawn on the ground, each QR code would occupy the centre of a box, but the presence of the QR codes, which identify the centre of the boxes makes it unnecessary to trace its edges. Therefore, the chessboarf cannot be drawn. The columns and the lines of the chessboard are identified by letters and numbers, starting from the top left corner. Each QR code is assigned a position, identified by a letter and a number. Moreover, the chessboard is conventionally oriented so that the upper side corresponds to the North and, as a consequence, the lower side to the South, the left one to the west and the right one to the East. If the location allows it, we suggest that the chessboard be oriented in coherence with the cardinal points.

You can download the 25 QR printable codes of the Astrophysical CodyMaze at the following links:

To facilitate their arrangement and use, each QR code reports both position and cardinal points. Five QR codes have stars, which affect the execution of some instructions.

Objective of the Game

Get out of the virtual labyrinth, following the instructions provided by the @codymazebot.

The game can have one or more players. The limit to the number of players is only given by the dimensions of the chessboard on which players should move independently, each one following the instructions provided by @codymazebot.

In order to play, you need:

The player interacts with the game by performing the following actions:

Elementary Instructions. The bot uses the 3 elementary instructions of CodyRoby, represented by the respective initials in small letters:

Repetitions. The bot asks to repeat more than an instruction or a series of  instructions, indicating the number of repetitions, followed by the code to be repeated enclosed in curly brackets:

Nested Constructs. Repetitions, just like the remaining constructs described in the following, can also be nested. In other words, the code to be repeated can contain repetitions or other constructs, as in the following examples:

The conditions used by the bot are the following:

Conditional Repetitions. The bot uses the term “while” to say that one or more instructions should be repeated as long as a condition persists. The condition is expressed in brackets, while the code to be run is enclosed in curly brackets:

Advice. In order to illustrate the syntax to participants, we suggest that you play a game all together, stating and commenting together the series of instructions which the bot assigns at each step. As an alternative, you can create series of trial instructions, so as to simulate the execution.

CodyMaze is a project of Alessandro Bogliolo, developed by Brendan Paolini, Lorenz Cuno Klopfenstein and Saverio Delpriori, of the Degree Course in Applied Computing of the University of Urbino. The astrophysical version has been developed in collaboration with the INAF Play.coding working group, coordinated by Maura Sandri.