Exploring the Solar System has never been so easy and amusing. With this activity, you will realize an interactive panel  in which you will introduce the planets of the Solar System, the Sun, the Moon and the main belt of asteroids, which is placed between Mars and Jupiter.

In order to realize this activity, you need: 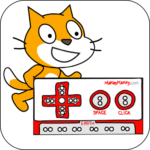 Makey Makey is a kit which can make common-use conductive objects interactive through the creation of simple electrical circuits. In practice, it allows to create a touchpad with any conductive material, by connecting it to Makey Makey through crocodile clips.

It is composed by a card, 8 crocodile clips (the number changes according to the kit) and a USB cable. When it is connected to Scratch, it can ignite students’ engineering creativity thanks to the use of block coding.

The activity we propose follows various processing stages (clicking on each link, you will be led to the related description, in the page):

Before starting to realize the interactive experience with the Makey Makey kit and Scratch, prepare the information which you want reproduced by the interactive panel. You can carry out web searches, or use our textbook. Here you will find an example sheet, which we prepared for you. You can customize the contents by updating the information and the celestial objects which are more interesting for you.

With any recording device and a microphone, read the descriptions which we selected for each single celestial object (or the ones you have created, on your own). You can record directly with Scratch, by adding the command “reproduce sound” and selecting the item “recording” from the drop-down menu. Or else, as recording device, you could use Audacity (a free software for editing multitrack audio).

In order to introduce each planet, before the explanatory part, you could select about ten seconds of music. It may also be a simple jingle, or a song you like, for example for the Sun you could include the piece Katrina & The Waves – Walking On Sunshine (Official Video).

You can have fun making the interactive panel by hand, drawing on the white billboard all the objects which you will describe. After cutting them up and gluing them on the black billboard, you need to make the panel more solid, so that the connections to the Makey Makey kit are stable; therefore, glue the black billboard upon a board, recovered from packaging boxes (look at the example in the figure). Alternatively, you can download this file, print it in the size you need, and glue it on the cardboard panel. 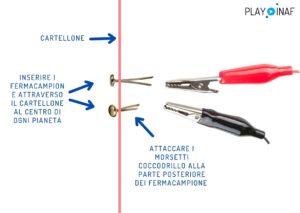 Use the components of the Makey Makey kit in order to create connections which will activate the panel. Take the sample-holder and place them on the centre of each element which you will make interactive: therefore you will place one upon the Sun, one for each planet, and one for the asteroid Ceres.

At the rear of the sample-holder, glue one end of the crocodile grip, and glue the other one on the Makey Makey card, and, depending on where you have glued it, you will know which command you can include in order to activate that object upon the panel.

The sequence we have realized is the following (but might change according to the Makey Makey version you bought, or to your personal choice):

Finally, connect a clamp to one of the points of the card where it is written: “EARTH” ( track of electrical circuits) and leave the other end free, which you should grasp in order to close the circuit, using yourselves as electric conductors.

Connecting the Makey Makey kit to the personal computer through the USB-port, open Scratch. You will note that among the commands bottom left, a new voice appeared: “Makey Makey”. Click there, take the block “when you press the key” and include one of the letters corresponding to the planet which you want to activate. 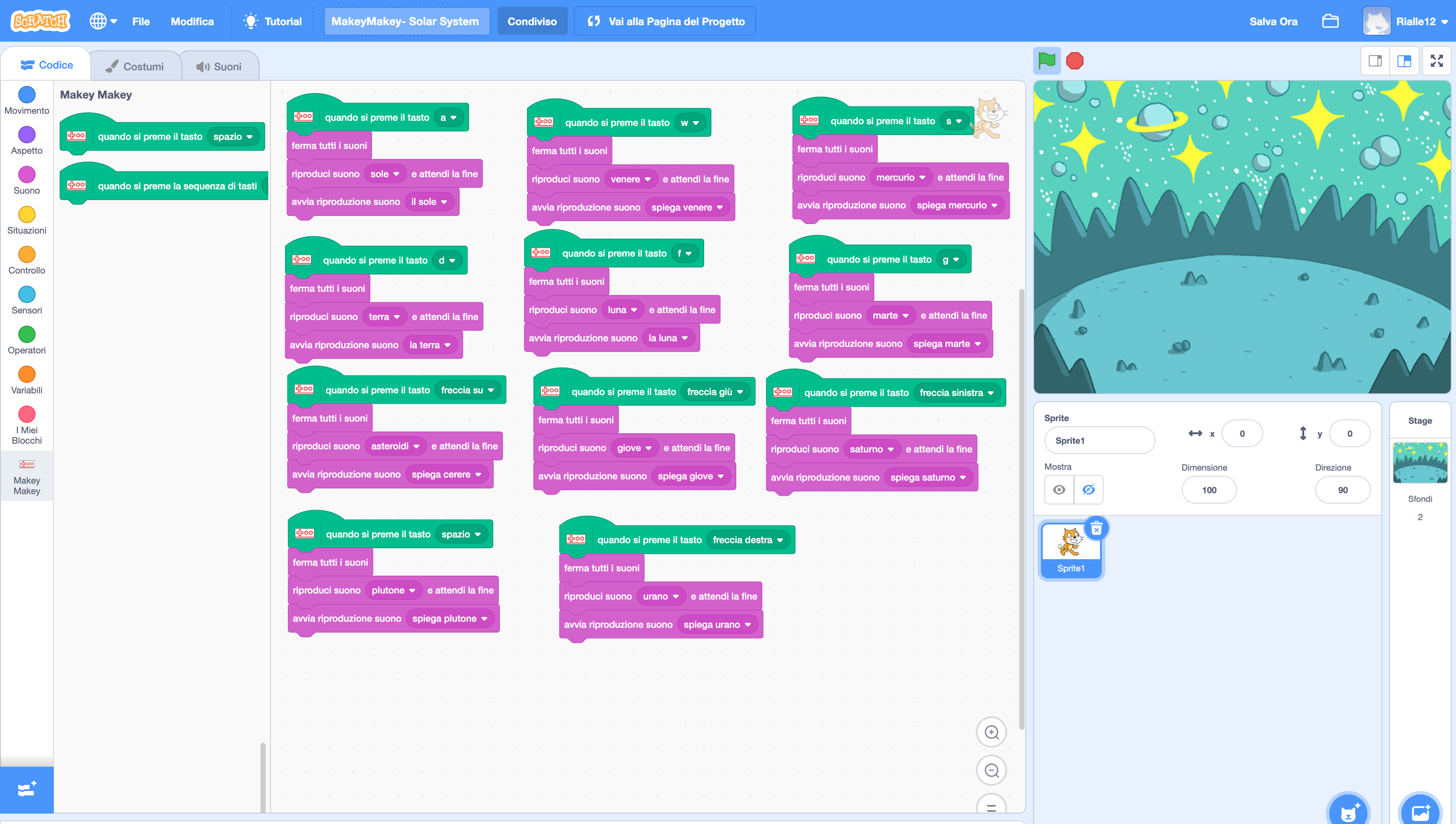 Now that all connections have been made and the code is ready, you just have to test the interactivity of the panel which you have realized.

Remember to close the circuit by grasping with one hand the “free” end of the crocodile clamp, and with the other one the sample-holders at the centre of each celestial object…  you will see the amazing spectacle!