By Sara Ricciardi
In Tinkering

Filled with curiosity, after a month of observing the sky the students want to dare to make sense of the changing aspect of the Moon.

Students have the opportunity to explore an INAF exhibition designed for this purpose, where they can find time to observe and think about possible explanations and connections with what they have observed from life.

This object – designed by Fabrizio Villa of the National Institute of Astrophysics and made for the occasion – is an octagonal wooden box containing a reproduction of the Moon made with a 3D printer, fixed to the top with a thin fish wire  so as to appear suspended, and visible from the outside only through eight small ones arranged along the eight faces / walls of the polyhedron. By simply adding a light source, a torch for example, the game was done! In turn, the children were invited to look through the peepholes, progressively changing position around the Lunatario: it resulted that the shape of the Moon, although always the same, changed in the eyes of each children depending on the relative position between the light source (sun / torch) and position of the observer. The facilitation of this phase was based on play, and on sharing this discovery among peers. Later, some of the children choose to reproduce one or more phases of the moon using black cards and white pencils. This more reflective and abstract phase was supplemented when necessary with new observations or “drawings from life” with an eye on the “moonlight” and an eye on the drawing. A familiar but little investigated Moon opened up to observation with new curiosity from the children. But there is more: the particular shape of the lunario,  linked to the needs of operation, in fact increased the playful dimension of the experience. The device actually appears as a magical, mysterious box, irremediably exposed to the curiosity of observers thanks to those small holes, the only possibility of revealing the contents. It is interesting to underline the analogy with many optical toys and pre-cinematic devices, from the darkroom to the zoetrope of the mid-nineteenth century, from the stereoscope to Edison’s kinethoscope. After all, amazement, the magic of vision, the play are fundamental elements in cinema itself in reference to the relationship with the viewer. This magic box, born as a prototype for Destination Luna Kids, is evolving into a more complex portable design and will become a structured exhibition for the outreach of the National Institute of Astrophysics. 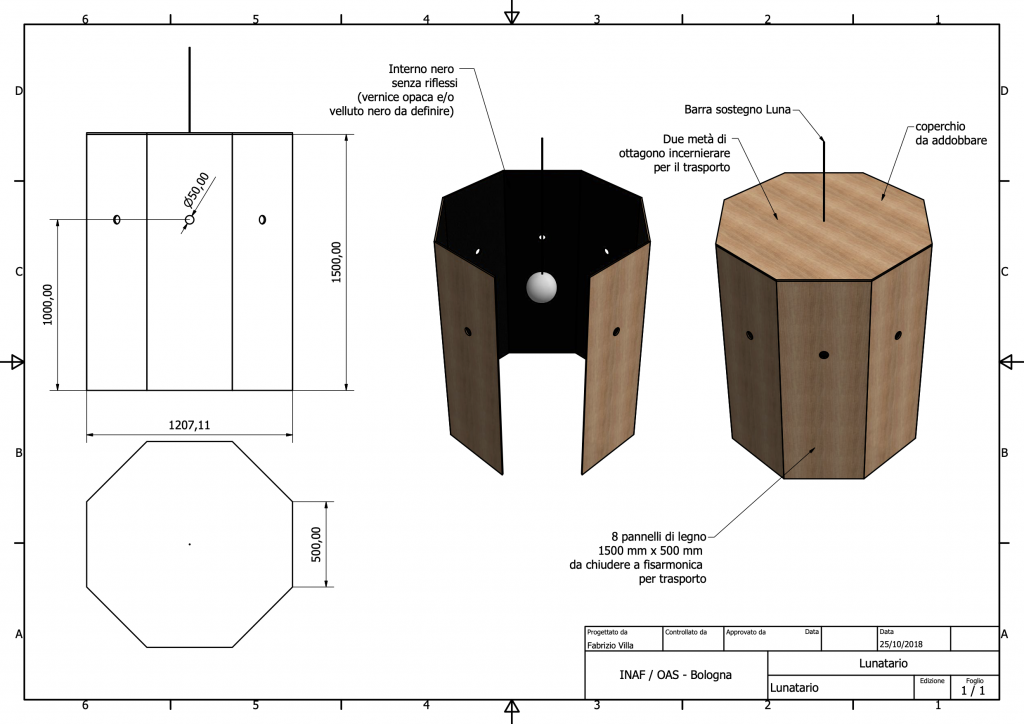 Surely this exhibit can be easily reproduced using common materials such as a large cardboard box but for schools who want to try their hand, a smaller version is available that can be built with the help of a 3D printer and a few other simple materials. All description and files here.

If deemed useful by the teachers it will be possible to have other “physical” experiences interacting in a semi-dark room with an inflatable globe (representing the earth), a torch (representing the sun) and a white polystyrene ball (the moon).

Teachers and experts will not explain the phases of the moon but will allow students to decide how to set up their models. The function of the educator is that of facilitator in the learning process.

After these exploration and discussion, the students went back to their notebooks to capture their current understanding of what makes the moon different on different days.

If the observation and the transcription in the moon notebook is repeated after this work with the physical model it can be observed how the observation changes. Some guys may try to record the moon at the same time all the time, or they may record several times in the same night.