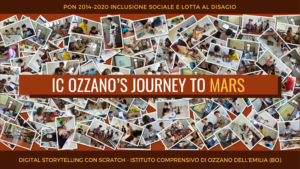 The summer camp – organized in the framework of the PON: social inclusion and fight against discomfort – took place in a fortnight from June 11 to 22, each day from 9 to 12, for a total of 30 hours. This summer camp was about digital storytelling with Scratch, with an open-ended narrative structure, addressed to pupils of the first three years of secondary school.

We proposed that the participants should develop a story on a common topic related to contents of educational robotics: the exploration of the planet Mars (the title of the project is ICOzzano’s Journey to Mars). In order to provide a scientific background aimed at the development of their adventures on the red Planet, in our first meeting we made an outline of Astronomy, as related to the Solar System and Mars, with recent pictures and videos of both Nasa and Esa; we talked about the exploration of Mars (space probes, lander and rover of Nasa and Esa, with a particular reference to those wich, in the summer of 2018, were up and running on the planet, namely Curiosity and Opportunity). Moreover, we have shown them Mbot (the educational robot of MakeBlock), as a possible character of the story, thus anticipating that, by the end of the week, they would have the chance to build it. Later on, the class was divided up into working groups – as  heterogeneous as possible. Each group defined the story to develop, by identifying both main characters and setting, and starting to gather materials by using official sources (mainly Nasa and Esa). In this context, it has been crucial to face the question of the reliability of the sources and of the copyright of pictures. 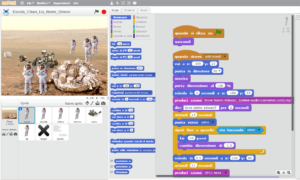 In the second day, we introduced the basics of programing and of the computational thinking, with an introduction to visual programming through the Scratch language. In particular, we started from the description of the interface and its functions, listing then the main commands, namely: sequence, cycle, choice, data, operator, event, questions, messages. If you want to customize sprite and backgrounds, you can use graphic elements with Scratch (bitmap and vectorial files). Finally, we gave a few open-ended examples of digital storytelling with Scratch. The groups then started to work on their own, by developing the storyboard and translating the story into a script. 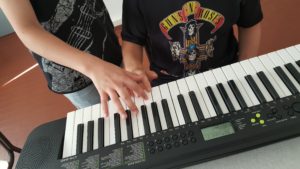 During the whole summer camp, we developed in each group  four macroareas of coding (development of the story), musical language (composing the soundtrack with musical instruments brought from home), textual language (creation of dialogues and story-telling) and graphic language (creation and/or customization of both sprites and backgrounds). The groups worked each one on its own, covering the four macroareas. They composed the soundtrack, bringing musical instruments from home (mandolin, keyboard, classical and electric guitar), and later inserting it inside the code. In the same way, they recorded the voices for dialogues and story-telling. 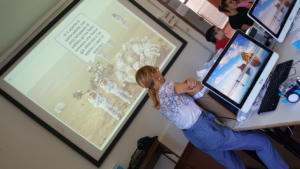 In the penultimate day, the various groups presented their work to the class and to a few  teachers. At the end of each presentation, there has been a discussion, aiming at underlining strengths and weaknesses of the project, and always trying to offer constructive criticism. We have discussed the difficulties encountered by the pupils, as well as the positive and negative aspects of the experience. One of the main difficulties which emerged was connected to relational aspects, rather than to technics and implementation. 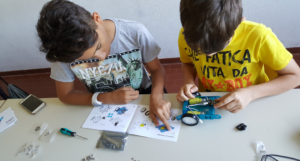 Later on, in pairs, they started building Mbot (one for each group). It has been interesting to note how some pupils, who had shown great problems in concentrating upon the development of the code, actually showed impressive skills in this phase, by completing the construction in a very short time, on their own.

The last day was devoted to programming the robot they had built, through The mBlock programming language, based upon Scratch. We revised the basics of robot programming: movement, checking sensors and lights, with simple procedures to define the robot’s behaviour in front of an obstacle.

We got the impression that this experience was very positive for the children. Over and above developing computational thinking, using coding as a tool to face storytelling, integrating it with a narrative, graphics and musics, the major part of the work concerned team working. The children worked very well together, inside the single groups as well as between different groups, integrating in the project even children with difficulties. New friendships have been formed among children of various age groups, tied by the common project, or else by the common passion for music and coding.