On November 16, 1974, from the radiotelescope of Arecibo, a peculiar radio message was sent out into space, towards the Hercules Globular Cluster, 25 thousand year-lights away from the Earth.

The message was composed of 1679 binary digits (zero and one), one after the other. Why 1679? This number is the product of two prime numbers: 23 and 73. In this way, supposing that anyone receving it decides to order it in a quadrilateral, he/she will only be able to do this by ordering it in 23 lines and 73 columns, or 73 lines and 23 columns. In the first case (23 lines, 73 columns), the information will produce a meaningless design, whereas in the second way (73 lines, 23 columns), it will form an image, in which you can recognize precise information: i.e., the well-known Drake’s cryptogram e.

However, we do not want to reveal the contents of the message immediately. We would like you to discover it yourself, through an activity of coding unplugged. Download the pixel-art code on this page, and try to color the squares of a sheet, following the scheme indicated. In the end, you will see the message which Frank Drake, with the help of Carl Sagan, composed and sent out in the space, exactly 46 years ago (indeed, this card was made in order to celebrate the anniversary of the event).

As an alternative, you can find here a colour card, or a black-and -white one. 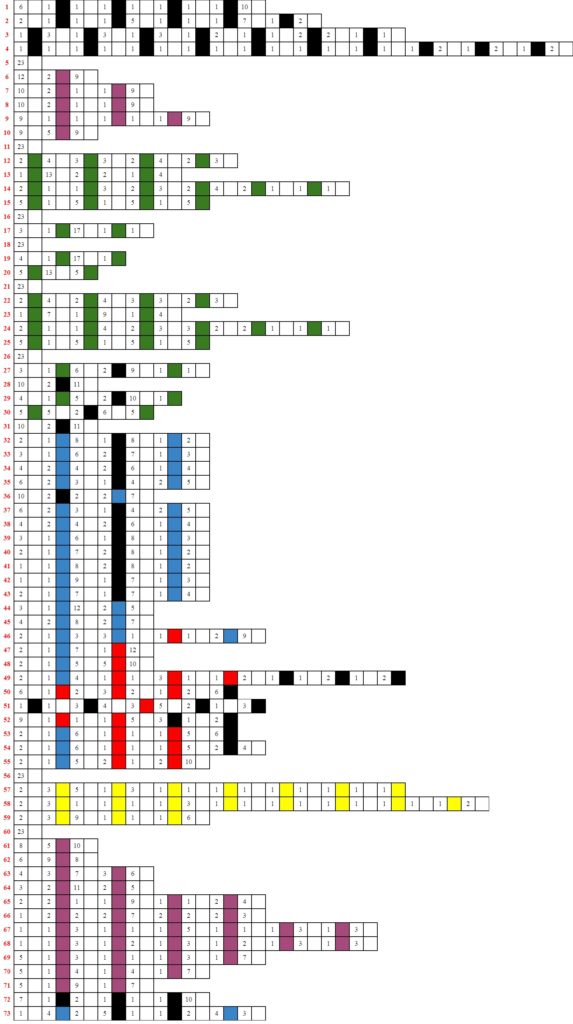 Once you have finished colouring the squares, scrolling your sheet from left to right, and from top to bottom, you will find this information:

In sending this message, the hope was to reach an alien civilization, possibly intelligent and able to decipher it, so as to tell them a bit about us. This message is still travelling through space, and is still very far from the goal. However, anyone could intercept it, during its journey, and find out that we exist.

What kind of message would you send out into space if you had the chance?

Try and prepare a message: first the drawing, then the corresponding code… and pass this on to your classmates. Perhas they will manage to decipher it 🙂