On February 18, 2021, shortly before 10 pm Italian time, Perseverance – the rover of the Nasa Mars 2020 mission – landed successfully on the surface of Mars. While humankind waited, breathless, imagining the ground of the red Planet quickly approaching the rover, something looked upwards, towards the sky covered by the large parachute.

At first, nobody noticed, engrossed by the sand lifting up all around the rover, the stones, the pictures which Perseverance immediately gave us. However, within a few hours, someone went to review the images, and looking at the open parachute, the look, at first fast, slid back: eyes half-closed, contemplating the improbable spectacle of small segments, clumsily coloured red and white. Then came the doubt: if the parachute presents that peculiar colored pattern, there must be a reason, since Nasa leaves nothing to chance. What if it’s a code?

It took six hours for “the net” to violate the code… and revel the message of  Nasa, addressed to all of us. Let’s see how they did it … 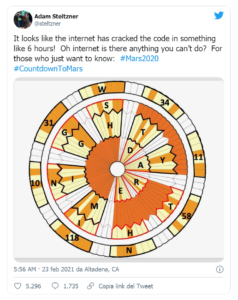 While looking at the parachute, you can note four circular sectors: an outer, thin ring, separated by three inner circular broader sectors, through a black ring. The sequence of coloured segments seems casual, but there are only two colours – just like 0 and 1 of the binary code – therefore, the first thing which comes to mind is replacing the red segments with 1, and the white segments with 0.

When bringing the sequence of 0 and 1 back on a row, you actually obtain something very similar to a message written in binary code… which makes us coding fans feel at home. However, before transcribing the code, we should decide from which point of the circumference to start and where to go.

In each sector, there is a group of contiguous red slices, which might represent a padding. Upon each sector, a word might be encoded, and if it is shorter than the spaces available (80 slices in each sector), cells have been filled with red. In this case, these slices should be cancelled, and the word could reasonably start from the end of this continuous sequence of reds.

If so, the three sequences would be as follows:

The outermost ring has differences, since there are no contiguous groups of red slices, as in the three inner circular sectors.

Let’s deal with the three circular sectors, and then of the one of the external ring.

The figures of each sector are 80. Let’s try to consider them in groups of ten, starting from the innermost sector:

Let’s throw away the last four blocks, which contain what we tought was a padding. This is what’s left:

Let’s try and see what happens if we transform this alleged binary code into decimal, with the calculator. The four sequences become:

If we are expecting words, we should convert these numbers into letters. Let us add 64, and then pass to the ASCII code:

Let’s see the table in order to discover which letter is associated to each decimal number. Our sequence becomes D A R E.

Let’s do the same with the intermediate sector:

It just seems to make sense.

Let us decodie the last sector, in the same way. Let us divide the sequence into groups of ten:

Let’s throw away the last two sequences, which include the padding:

And transform it in decimal:

And here is revealed the message hidden by Nasa in the parachute: dare mighty things!

But we’re not done, the external ring is still missing. We shall treat it in the same way, even though, without padding, probably all the slices will be significant, and we do not know for sure where to start. In order to understand where to start, it certainly helps that – in the parachute – we have identified slices of three white segments (corresponding to bit 0) – related to the first three bits of the blocks of ten, grouped in the internal sectors – which represent a “space” between the letters. Once identified this pattern (clearly visible in the image above with the tweet), it is simpler to decipher the external ring, because the possible points where to start pass from 80 to 8. Let us start from the one near the vertical, and move like the hands of a clock:

All this does not seem to make sense… however, among the letters, there are N and W, which could correspond to North and West. If that were so, the others might be simple numbers, thus:

What if they are geographical coordinates? 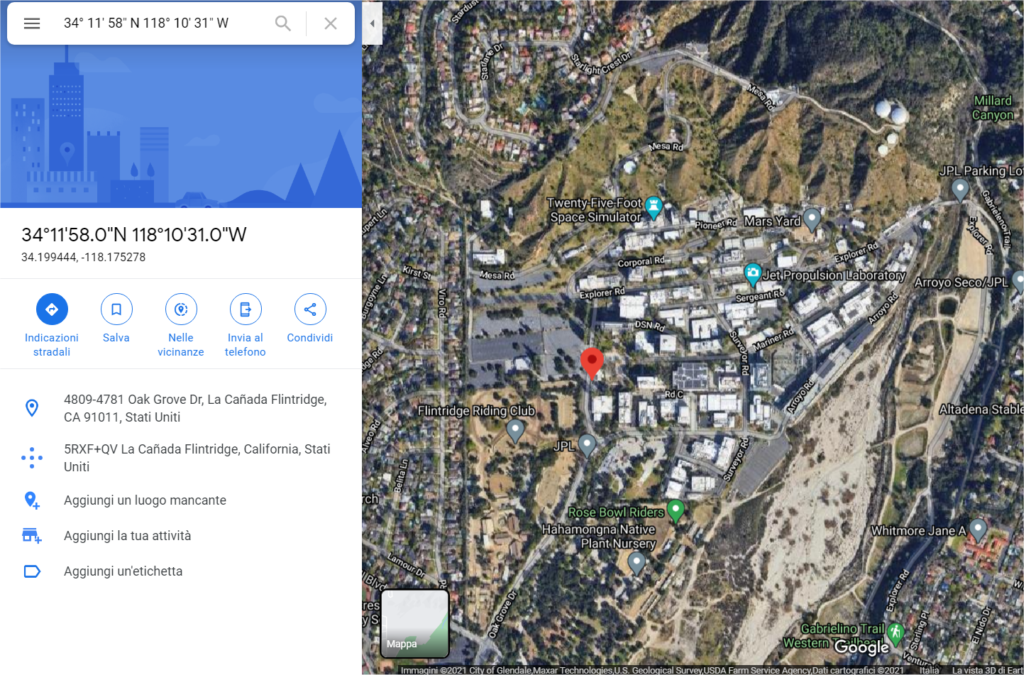 That’s the NASA Jet Propulsion Laboratory (JPL), where Perseverance was born! That was to be expected… the only acceptable alternative would have been the Jezero Crater

It was hard, but we made it. It’s fun to find out these hidden contents, which are known as Easter eggs!

We end by proposing our own motto, and we leave you the pleasure of deciphering it.

If you want an “easier” version of our parachute, you can find it here. 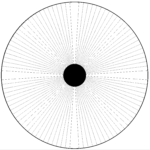 If you want to have fun and realize your own parachute, we leave you an empty circle, which you can divide up in the number of sectors you want (by using a compass), on the basis of the message words you want to hide. If the word is very short, colour up the unused segments (padding). In each sector, words can start where you prefer, they should not be necessarily aligned. In order to download the circular grid, click on the image and (when you see it big) click with the right button of the mouse, in order to save it on your computer. Have fun!