Why do rocks sink and ships float? 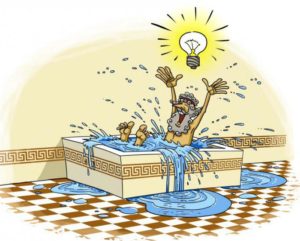 We are in Siracusa around the IIIrd century before Christ. A man is immersed in a tub full of water and is taking a relaxing bath. At a certain point, he cries out “Eureka!”. That man was Archimede, a well-known scientist, who had just guessed that fundamental physical law  – later on named after him – which explains why bodies float.

The principle of Archimedes states that “the upward buoyant force which is exerted upon a body immersed in a fluid, whether fully or partially, is equal to the weight of the fluid that the body displaces“. In other words, if we take two objects with the same weight, although made of different materials, and immerse them in water (or in any other fluid), they receive an upward push which depends exclusively on the immersed bodies, rather than on their composition: the larger the volume of water displaced by the body, the greater the thrust received. Since, for the same weight, the lighter material occupies a larger volume (a kilogram of wood, for example, occupies a larger volume than a kilogram of iron), it receives a stronger push from the fluid.

A legend has it that Archimedes used this principle to verify the honesty of a goldsmith, who had realized a precious crown. First of all, he obtained a gold bar of the same weight of a crown realized by the craftsman. Then he hanged the bar and the crown on the arms of a scale, and immersed both in two pots full of water. If the crown had been of solid gold, the scale should have maintained the balance, because both crown and bar would have occupied the same volume, and the water push would have been the same on the two arms of the scale. In fact, it seems that the goldsmith was actually dishonest, and therefore the volume occupied by the crown was larger than that of the gold bar, because of the presence of lighter materials. As a consequence, the crown received from the fluid a stronger thrust, which inclined the scale to the side of the gold bar.

On the basis of the principle of Archimedes, the behaviour of a solid immersed in a fluid depends on two elements: its weight, which acts from top to bottom, and the buoyancy, equal to the weight of the fluid displaced by the body, which acts bottom-up. Therefore, in order for a body immersed in a fluid to float, it should simply displace an amount of water equal or greater than its own weight. This is what happens, for instance, with ships, but it can easily be verified at home, where we can see that a watermelon, with a weight of a few kilos  (for instance) immersed in a tub of water (for example the bathtub), can float, whereas a  – very light – carrot sinks: the size of the watermelon is such that it displaces a volume of water equal to its own weight, whereas the small carrot does not displace enough water.

The principle is also valid for bodies immersed in a gas, and explains why the balloon goes up in the sky: thanks to its contents of hot air (which is lighter), its total weight is less than that of the air (colder, therefore heavier) which it replaces. 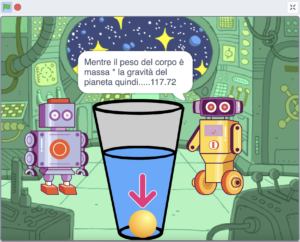 You will see that you will open the project inside the browser, at the webpage of Mit (Massachusetts Institute of Technology). Click on the green flag and move on, following the directions of the two robots. If you are interested in the programming section, do not hesitate to look inside the programme and remix it, making alll the changes you like. You could, for example, add new elements, such as sounds, audio recordings, and use other fluids or bodies, etc. Finally, share it with the Scratch community, so that other people may learn from your own progress and creativity!