Jupiter is the fifth planet of the Solar System  in order of distance from the Sun, and the largest of the whole Solar System: its mass is twice and a half the sum of the masses of all the other planets together!

Jupiter is classified as a gaseous planet, namely mainly composed of gas. Its huge atmosphere is characterized by several bands, inside which we can observe the presence of numerous storms.

Among them, the Big Red Spot stands out, an anticyclonic storms which has been going on for at least 300 years!

Here below, you will find the code in order to realize it with pixel art, or you can print the colour card or in black and white. Have fun! 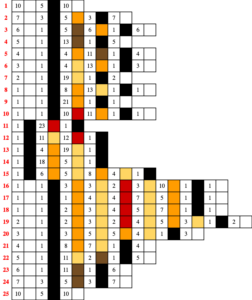